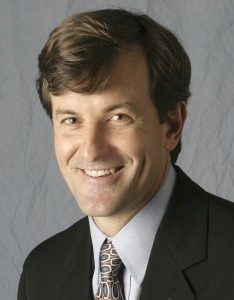 Paul Rice opened TransFair’s first “national headquarters” in 1998 to bring the fair trade movement to the United States. Fair Trade USA (previously named TransFair USA) promotes a market model that guarantees small-family agricultural producers a fair price for their products, direct trade and access to credit and support for sustainable agriculture. Since launching the Fair Trade Certified label, Paul has pushed to mainstream the Fair Trade movement and expand its impact on farmers by innovating the model, partnering with over 800 U.S. companies and expanding certification across new product categories. This vision and leadership helped push U.S. retail sales of Fair Trade products to an estimated $1.5 billion in 2011, enabling millions of small farmers and workers to live better.

Paul came to Fair Trade by way of the mountainous Segovias region of northern Nicaragua, where he served for 11 years, organizing cooperatives and training farmers. While in Nicaragua, Paul founded and led PRODECOOP, the country’s first Fair Trade, organic coffee export cooperative, which introduced him to the transformational power of Fair Trade. Subsequently, Paul served as strategy consultant and development advisor to 22 cooperative enterprises throughout Latin America and Asia, helping them become more competitive, democratic and self-reliant. Paul’s first-hand experience over the last 30 years in the areas of global supply chain transparency, social auditing, sustainable agriculture, and cooperative enterprise development is unique in the certification world.

Paul has received numerous honors and awards for his pioneering work as a social entrepreneur in the Fair Trade movement.  In 2000 he received the prestigious international Ashoka Fellowship for social entrepreneurship. In 2001 Paul was recognized by the AVINA Foundation for his “leadership for change.” Paul was honored by the Klaus Schwab Foundation for Social Entrepreneurship and the World Economic Forum as one of the world’s top 40 Social Entrepreneurs in 2002.  Fast Company magazine named Paul “Social Capitalist of the Year” four years in a row (2005-08). Paul also received the prestigious Skoll Award for Social Entrepreneurship and has been honored by the Clinton Global Initiative for his leadership in Fair Trade.  Paul holds an Economics and Political Science degree from Yale University and an MBA from the Haas School of Business at UC Berkeley.

A 501 (c) (3) nonprofit organization, Fair Trade USA is the leading third-party certifier of Fair Trade products in the United States. We enable you, the consumer, to make a difference with your dollar. We help people and the planet work in tandem so both are healthy and sustained. We provide farmers in developing nations the tools to thrive as international business people. Instead of creating dependency on aid, we use a market-based approach that gives farmers fair prices, workers safe conditions, and entire communities resources for fair, healthy and sustainable lives. We seek to inspire the rise of the Conscious Consumer and eliminate exploitation.