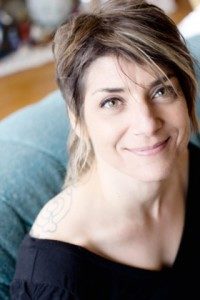 Cartoonist Ellen Forney is the author of NYT bestseller Marbles: Mania, Depression, Michelangelo, and Me, and the 2012 “Genius Award” winner in Literature from Seattle’s The Stranger. She collaborated with Sherman Alexie on the National Book Award-winning novel The Absolutely True Diary of a Part-Time Indian, created the Eisner-nominated comic books I Love Led Zeppelin and Monkey Food, and has taught comics at Cornish College of the Arts since 2002. She grew up in Philadelphia and has lived in Seattle, Washington since 1989. Ellen swims and does yoga, and fixes things with rubber bands and paper clips.

Ellen teaches comics and Graphic Novels as Literature at Cornish College of the Arts, and has also taught and led workshops at Pacific Northwest College of Art and numerous libraries and schools.

“As engaging and informative as it is inspirational . . . [Marbles] perfectly captures the exhilarating frenzy of mania and the dark void of depression.” – Kirkus Reviews

Marbles: Mania, Depression, Michelangelo, and Me: A Graphic Memoir