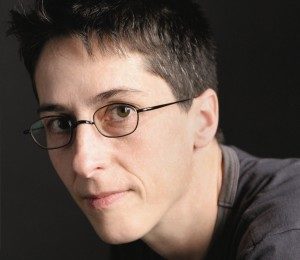 Author of Are You My Mother? A Comic Drama, Fun Home: A Family Tragicomic and the comic strip Dykes To Watch Out For.

For much of Alison Bechdel’s thirty-year career she has skulked on the cultural margins, writing, drawing, and self-syndicating the comic strip Dykes to Watch Out For. That generational chronicle, “one of the preeminent oeuvres in the comics genre, period,” (Ms.) ran regularly in over fifty LGBT publications in North America and the UK. Many award-winning collections of Dykes were published in book form by an independent feminist press, and were translated into several languages.

Bechdel gained wider recognition for her work with the publication in 2006 of her groundbreaking graphic memoir Fun Home: A Family Tragicomic. Fun Home was a National Book Critics Circle Award Finalist, and in a great moment for graphic narrative, was named Best Book of 2006 by Time Magazine. Time called the tightly architected investigation into her closeted bisexual father’s suicide “a masterpiece about two people who live in the same house but different worlds, and their mysterious debts to each other.”

After setting aside Dykes to Watch Out For in 2008, Bechdel began devoting herself full-time to autobiographical work. A second graphic memoir, Are You My Mother: A Comic Drama, was published by Houghton Mifflin Harcourt in May 2012.

In her work, Bechdel is preoccupied with the overlap of the political and the personal spheres. Dykes to Watch Out For was an explicitly community-based and politically engaged project. But in her deeply intimate memoirs about her father’s life before the gay rights movement and her mother’s life before the women’s movement, she turns a microscopic lens on the internal mechanisms of oppression and liberation.

Bechdel is the recipient of a 2012-13 Guggenheim Fellowship.

Are You My Mother?: A Comic Drama